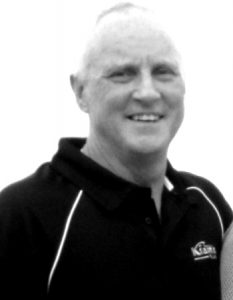 Patrick and the family joined the Club 1992 and immediately supported the Juniors via water safety. He then replaced Rex Parkes in 1995 and after five years saw the membership grow from 33 to 150 by 2000.

2007/09 as Treasurer, was able to secure a grant to refurbish areas of the main club, sundeck and B.B.Q. area and secured the Curves franchise.  He continued to obtain grants to replace upstairs eastern side windows – low energy lighting – the southern I.RB shed and 2015 saw the installation of a lift and storage room off the Sun Deck.  Patrick led the Committee for the 90th Celebrations with Darryl Eastlake and secured Kerry O’Keefe for the l00 year celebrations which were both outstanding occasions.

With Patrick at the helm of the building committee the old shabby club house has been transformed.