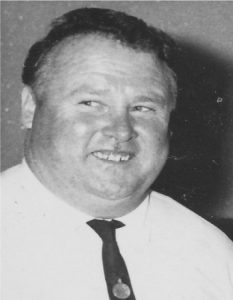 Ray was always available whenever called upon and participated in many rescues along the coast when membership was depleted, competed at carnivals in the surf races and beltman in the March Past team.

He became known as Kiama’s barefooted winger as his father was opposed to him playing football at the time.  Ray would sneak away to play and leave his boots behind so his father would be unaware of his activities.

There had been three attempts to establish a Swimming Club and it seems that Ray Stead was prominent in seeing the formation eventuate.  He was for some years Official Starter for events at the Kiama Swimming Club and was examiner of the swimming certificates for the local Guides and Scouts.

He was curator of Kiama Tennis Club with his wife Norma. He was awarded the Medal and Certificate of Merit for Act of Gallantry 1961-62 for the rescue of a man at sea.