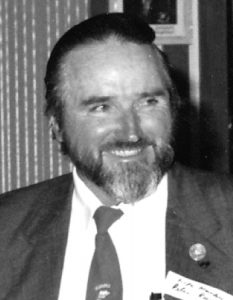 A serious accident 1959 just after receiving his Bronze Medallion did not stop Peter from performing Patrol Duties for twenty years as Patrol Captain with 100% proficiency and awarded Clubman of the Year 1969. Unable to compete at Carnivals, Leo Wiggins convinced Peter to take over the Secretary’s role which lasted 30years. During that time was a great supporter to Don Meredith and the building committee throughout the years of construction and beyond. Working locally he was called upon several times for assistance at Surf Beach when Patrols were not on duty. Such was the case in 1969 while working on the building, Dallas Tidmarsh, Eddie Carrick and Peter responded to the rescue of two board riders in a serious situation in monstrous seas off Blowhole Point.

Peter organised many fund raising functions dances over Christmas were popular and the Chocolate Wheel at Frankie Laurie’s Carnival every year until his retirement.

Fortunately, all the memorabilia handed down from Leo was kept intact and added to over another thirty years which culminated in the comprehensive social history book of Kiama Surf Life Saving Club, which Peter and Margaret are very proud.