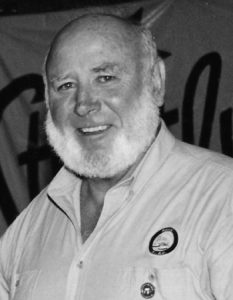 Peter gained a posting to Kiama High School after his marriage to local Wendy Hindmarsh. Peter grew up at Bondi where his Father was an Instructor at Nth. Bondi SLSC. and started patrols at 14yrs gaining his Bronze Medallion at 16yrs. was also a member of North Bondi Junior R & R and came 2nd at the Australian Championships at Mooloolaba in Queensland 1959. He was to go on to win more events for Nth. Bondi so was very experienced in the competition arena of R&R and March Past.

He slotted in to Kiama Surf Club at the height of the building and fund raising taking over from Leo Wiggins when Leo was transferred to Ulladulla with his work.  He was the most qualified member at Kiama – a successful coach, training Australian championship R & R. teams – training many Bronze Medallion/Qualifying squads 100% Patrol Proficiency on the beach and in the Radio Room and President “Spirit of Kiama” Committee.  A great organiser and founding member of the newly formed South Coast Branch S.L.S.C. 1980 and awarded Life Membership.

He taught hundreds of boys and girls how to swim during the summer holidays in the ‘Learn to Swim” campaigns.

This small article could not do justice to the contribution that Peter Dobson gave to Kiama Surf Club and theSurf Life Saving movement in general.