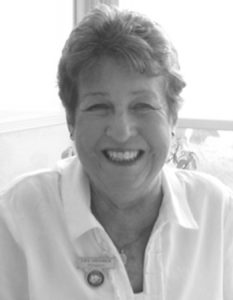 After Margaret married Peter Raison 1963 she soon found out “If you can’t lick em – join em”.  When Leo Wiggins handed over all the Secretarial material added to this were piles of Independent & Mercury papers and boxes of memorabilia.   To eliminate the papers she made a scrap-book with all the relevant references to Kiama and surf life saving.  This was the continuation of adding to the history that was hiding in the boxes such as the original minutes books from 1929.

As the family grew she became involved with the Kingfishers as Secretary and Mrs. Music as she trapsed behind the March Past Team and coach Russ Dawson with the cassette recorder. – The team won several Illawarra and South Coast Branch Championships so was worth the effort.

A member of the Ladies Auxiliary when the reputation as caterers exceeded all expectations and thousands of dollars from this activity enabled the Auxiliary to buy much needed equipment plus “Karawatha”, “Ken George” and equip the kitchen in the new Club House just to mention just a few.

As Peter accumulated more information it became the intention to put it all in a book and very disappointed at the Centenary Celebrations that this goal had not achieved.  It was then that Margaret decided to put everything on hold – had a two hour lesson in layout and between dairy chores – after four years the 100 year History of Kiama Surf Life Saving Club was launched August 2012.