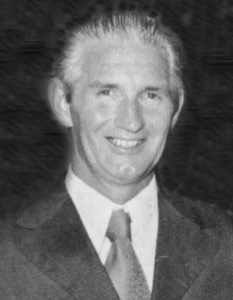 Don devoted much of his life to the Kiama Surf Club and his voluntary service covered more than a quarter of a century and died 1975 aged 44 yrs.

In 1948 he joined the club when only a teenager and the following year gained his Bronze Medallion.  In 1954 he gained his Instructor’s Certificate.   He served the club in all areas from committeeman to club President.

He served terms of office as Beach Inspector, Branch Delegate, Chief Instructor, Organising Secretary, Treasurer, selector and was also a member of the point score committee and the Club’s boat crew. He raised hundreds of dollars at Frankie Laurie’s Carnival selling “Lucky Numbers” every Christmas holidays. Don did not only serve the surf life saving movement in Kiama but was branch registrar for two years and vice president of the Illawarra branch for four years.  Margaret was a President and member of the Ladies Auxiliary

He was President at the Official Opening of the Club House by Mr. Con Assmussen, 29th November, 1969