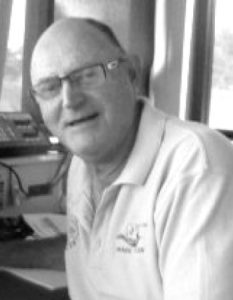 Joined Kiama when his young family joined the Juniors (Kingfishers) and gained his Bronze Medallion 1987. He immediately became involved and took on the task of Secretary of the Junior Organisation.  Chris, an outstanding member always ready to do any task and was obvious to gain the Award for “Outstanding Work behind the scene” in 2004/2005, 100% Patrol Proficiency every year of his Patrol service on the beach and later in the Radio Room and gaining the Defibrillation Certificate 2006/07.

After Peter Raison retired, Chris took on the task of Secretary from 1993-1999. In his first report, “I received a card from a woman in Orange whose child had received CPR from our IRB crew who were training for the Nationals at the time.  She mentioned how her son had a convulsion and was eventually taken to Wollongong Hospital”.  She went on the say “It is people like you folk who are life giving”. Chris has also held the committee positions of President of the Club, Club Manager, Club Captain and Chief Instructor.

Still very involved in the administration of the Club and assisting with the improvements that have seen the tired façade of the Clubhouse become sleek and attractive.