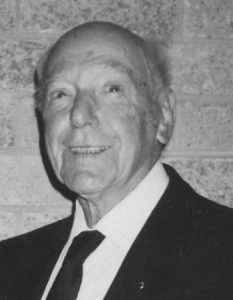 Cec came to Kiama as a young bank teller with the E.S.&A Bank September, 1929 – Bronze squad on 22nd December,1929.  He didn’t take long to get involved in the activities of the newly formed Club and gave many years of service gaining the ultimate credit of Life Membership.

Unfortunately, there was a four year gap while Cec was fighting with the forces W.W.2.  Letters from the boys overseas were grateful to the members back home for sending “Canteen Orders” which helped supplement meagre supplies.

1960 Cec, a banker, was transferred to Sydney and left a big hole for someone to fill.  The club held a farewell party and a dance for Cec and his wife.