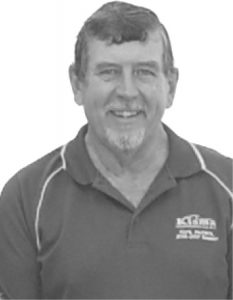 Bob Clarke was transferred to Kiama from Moruya already qualified as a Patrol Member and slotted into serving on the Committee and fund raising activities.

With the acquisition of the Jet Boat his expertise with motors saw him invaluable with the Jet Boat Committee and as Captain 1984-85 – 1989-90 and also the I.R.B. team.   He was awarded Club Man of the Year 1978/79 and several rescues requiring the jet boat were successful that year.

1989/90 Bob reported that between Christmas and New Year the boat was called out in large seas to search for and escort back to harbour battered yachts competing in the Sydney to Hobart yacht race.  100% Patrol Proficiency on the beach – Jet Boat and Radio Room