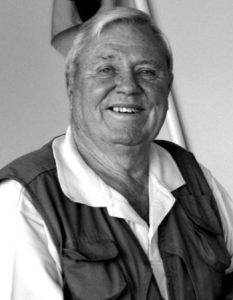 1984 “The oldies are at it again” – the second battalion of Dad’s Army are about to take to the water in the name of Allan Wallace, Phil Walker, Barrie Proctor and Brian Long with Gary Rogers at the helm.

From then on he became involved with the Radio Room and when Kiama acquired an I.R.B. trained in all facets of the I.R.B. and became Captain 1988-1991.

He was presented with a club blazer in 1989 when Awarded Clubman of the Year and the Kingfishers extended their appreciation to I.R.B. Captain Barrie Proctor by presenting him with an engraved plaque for his assistance in maintaining water safety in the rubber duck.

Barrie has been the ultimate member gaining 100% Patrol proficiency on the beach, I.R.B. and Radio Room and although retired from Beach patrols now still serves in the Radio Room.

Special praise to those members who found time to help other Clubs.  For example, Barrie Proctor doubling up to do Radio Patrols at the struggling Jones Beach Club which he did on several occasions until they were established.