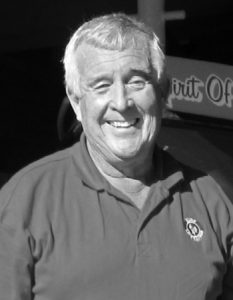 Murray grew up on the family farm at Bribbaree  (Near Young) and knew nothing about the surf. His move to the east and the coast changed all of that and his attention was drawn to the Surf Club when he saw the activities at the Jet Boat Shed from the Brighton Hotel one Saturday afternoon and struck up a conversation with Dobbo when they knocked off for a ‘refresher’.

He became a member of the Club and gained his Bronze Medallion December, 1977.

His knowledge with motors and his never ending enthusiasm especially with the Jet Rescue Operations made Murray and his family an integral part of Kiama Surf Life Saving Club and the community. Murray accompanied Gary Rogers to New Zealand in an exchange of ideas and techniques in power craft rescue and with all the qualifications available Murray would have been the most qualified Jet Boat operator on the South Coast.  His expertise was invaluable when his young son Justin was in the forefront of endeavouring to rescue multiple patients in the tragedy at Blowhole point 1992.