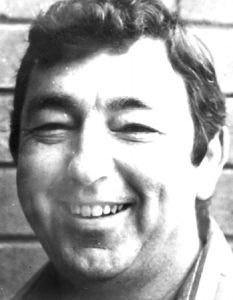 Gary transferred to Kiama Surf Club when Gerringong went into recess in 1961 and was soon in the swing of things with the building and his love of surf boat racing. 1968 saw the switching on ceremony for the lighting. Gary  had done a magnificent job and could change the fluorescent lights from all white to yellow one side red in the centre and green the other spanning the length of the auditorium.

Competing at North Wollongong February, 1964 at Illawarra Branch Championships the boat crew was swamped in one of the most spectacular boat crashes ever seen in the Illawarra which unfortunately saw crew member Gary Rogers suffer a serious spinal injury which caused his early retirement from competition.

His contribution to Kiama never waned and served as President especially at the 50th Anniversary with Sir Adrian Curlewis.  A new chapter in Surf Life Saving came when Kiama purchased the I.R.B. and Jet Boat Power Craft.  Gary, one of the first to gain his Driver’s Certificate – Power Boat Operator Certificate and in 1982 Gary and Murray McMillan toured New Zealand to exchange ideas and techniques of power boat rescue  Col Laughlin N.S.W. Power Boat Advisor “The fact that Kiama club has two representatives chosen is an indication of the club’s stature in jet boat circles”